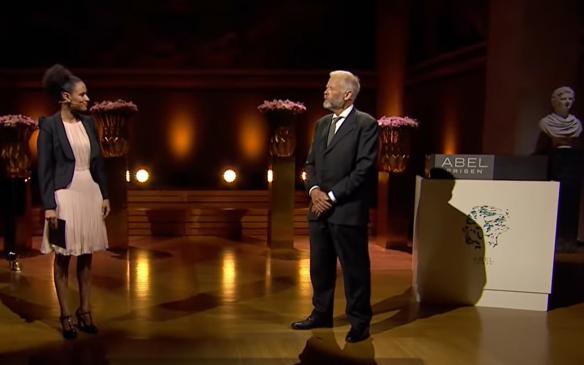 The 2021 Abel Prize Laureates László Lovász and Avi Wigderson was honoured together with the 2020 laureates Hillel Furstenberg and Gregory Margulis in a short series of digital events May 24 and 25, 2021. You can watch video of the events here.

The Abel Prize award ceremony
The ceremony was broadcasted from the University Aula in Oslo. Haddy N'jie, Norwegian singer, songwriter, writer and journalist was the master of ceremonies.

The Abel Reception
A digital reception was held in The Norwegian Academy of Science and Letters. The programme included:

In additon the reception contains a interview collage of the laureates, as well as live music by Need Strings.

The Abel lectures
The Abel Lectures was a program in two parts. Read abstracts by scrolling down.

Part one
Hillel Furstenberg: Random walks in non-euclidean space and the Poisson boundary of a group
Gregory Margulis: Arithmeticity of discrete subgroups and related topics

Hillel Furstenberg – Group boundaries: between harmonic functions and random walks
The classical theory of harmonic functions and their "boundary values", seen in a broad setting, leads to a notion of boundaries for general locally compact groups. It is useful because it can be made explicit for semi-simple Lie groups. Under certain conditions, the boundary of a group and a lattice subgroup coincide, so this notion is useful in rigidity questions.

It also plays a role in studying the asymptotic behavior of random walks on non-commutative groups, and as an application, helps establish a "qualitative" law of large numbers for products of matrices.

Gregory Margulis – Arithmeticity of discrete subgroups and related topics
In late 1950s, A.Selberg conjectured that, with few exceptions, all discrete co-compact (or, more generally with finite covolume) subgroups in semisimple Lie groups should be of arithmetic nature. He also obtained some partial results in this direction. I will start with a short description of this work by Selberg. The arithmeticity conjecture is related to the rigidity phenomenon in the theory of discrete subgroups of Lie groups.

László Lovász – Continuous limits of finite structures
The idea that a sequence of larger and larger finite structures tends to a limit has been around for quite a while, going back (at least) to John von Neumann's "continuous geometries".

After a brief survey of the history of such constructions, we turn to limits of graph sequences; this theory was worked out for dense graphs and bounded-degree graphs more than a decade ago. The "intermediate" cases (for example, the sequence of hypercubes, or incidence graphs of finite geometries) represent much more difficult problems, and only partial results can be reported. Perhaps surprisingly, the limit objects, whenever known, are best described as Markov chains on measurable spaces.

Why are we making such efforts to construct such limit objects? The talk will show a couple of examples of interesting graph-theoretic problems where graph limits are needed even for the precise statement of the problem, or as the starting point of the solution.

Avi Wigderson – The Value of Errors in Proofs
A few months ago, a group of theoretical computer scientists posted a paper on the Arxiv with the strange-looking title "MIP* = RE", surprising and impacting not only complexity theory but also some areas of math and physics. Specifically, it resolved, in the negative, the "Connes' embedding conjecture" in the area of von-Neumann algebras, and the "Tsirelson problem" in quantum information theory. It further connects Turing's seminal 1936 paper which defined algorithms to Einstein's 1935 paper with Podolsky and Rosen which challenged quantum mechanics.
You can find the paper here: https://arxiv.org/abs/2001.04383

As it happens, both acronyms MIP* and RE represent proof systems, of a very different nature. To explain them, we'll take a meandering journey through the classical and modern definitions of proof. I hope to explain how the methodology of computational complexity theory, especially modeling and classification (of both problems and proofs) by algorithmic efficiency, naturally leads to the genaration of new such notions and results (and more acronyms, like NP). A special focus will be on notions of proof which allow interaction, randomness, and errors, and their surprising power and magical properties.