A biography of Dennis P Sullivan 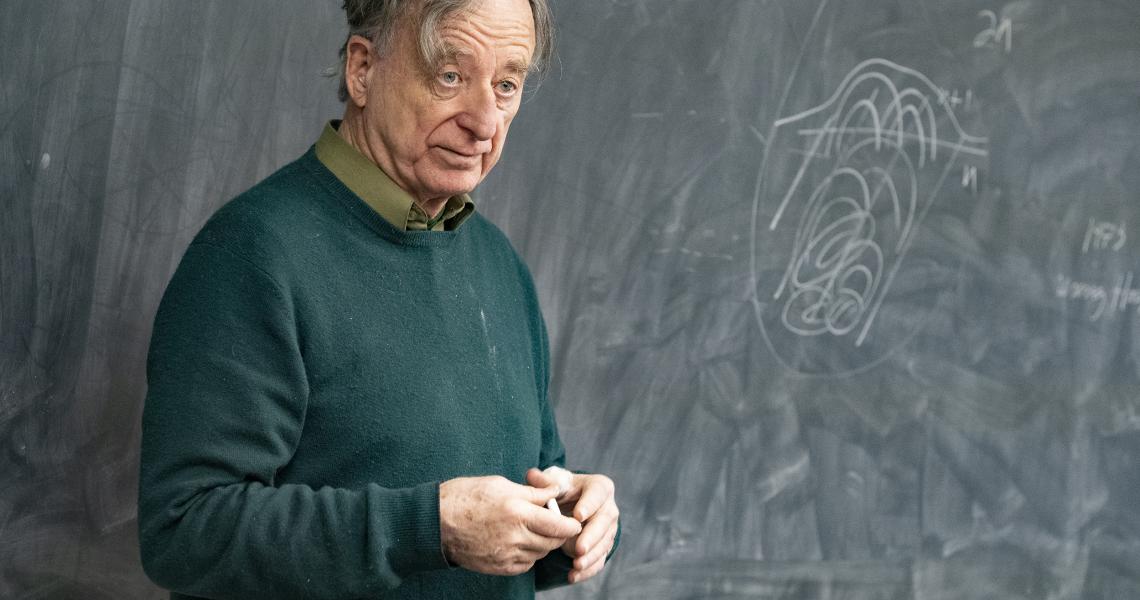 A biography of Dennis P Sullivan

Dennis Parnell Sullivan is an American mathematician most famous for his ground-breaking work on topology and dynamical systems, two fields in which ideas about geometric structure play a central role. A charismatic and lively member of the mathematics community, he has found deep connections between a dazzling variety of areas of mathematics.

Sullivan was born in Port Huron, Michigan, on 12 February 1941. When he was a young child his family relocated to Houston, Texas. He remained in the city to attend Rice University, initially to study chemistry, but soon switching to mathematics, graduating in 1963.

Changed the field
As a graduate student at Princeton University, Sullivan worked on the classification of manifolds, one of the fundamental questions in topology, building on the work of William Browder, his thesis supervisor, and Sergei Novikov. His 1966 PhD thesis Triangulating Homotopy Equivalences developed techniques and provided insights that helped revolutionise the area. The following year he wrote a paper on the Hauptvermutung, an important conjecture in geometric topology, for which he won the 1971 Oswald Veblen Prize for geometry from the American Mathematical Society, the first of many awards he would win in his career.

New ideas - new vocabulary
After his doctorate, Sullivan had fellowships at the universities of Warwick, England (1966-67), Berkeley (1967-69), and MIT (1969-73), where he was a Sloan Fellow. During this time, he gradually changed the way mathematicians thought about algebraic and geometric topology, introducing new ideas and building a new vocabulary. In 1970 he wrote a set of unpublished notes that were widely circulated and considered hugely influential, directly impacting the classification of smooth manifolds and central problems in algebraic topology. Such was the long-standing impact of his ideas, the so-called MIT Notes were finally published in 2006.

Sullivan was invited to give a plenary lecture at the 1974 International Congress of Mathematicians, an honour given to the top mathematicians in their fields. He had spent the 1973-74 academic year at the University of Paris-Orsay in France, and at the end of his stay he was made a permanent professor at the Institut des Hautes Études Scientifiques (IHES) near Paris.

Important breakthroughs
During his time in France, Sullivan made one of his most important breakthroughs, a new way of understanding rational homotopy theory, a subfield of algebraic topology. The area had earlier been introduced from an algebraic point of view by Daniel Quillen in 1969, but Sullivan’s work used differential forms, an idea from multivariable calculus, which opened the scope of the theory and made calculations much easier.

In 1981, Sullivan was made the Albert Einstein Chair in Science (Mathematics) at the Graduate School and University Center of The City University of New York. He kept his position at IHES and spent the next decade and a half shuttling between Paris and New York, often on Concorde.

Dynamical systems
By the late 1970s, Sullivan had begun to work on problems in dynamical systems, the study of a point moving in a geometrical space, a field usually considered far removed from algebraic topology, the area in which he started his career. The ability of computers to iterate functions beyond what was humanly possible had created an explosion of interest in this field, known popularly as “chaos theory”, since many of the dynamical systems exhibited chaotic behaviour.

One of the best known images from dynamical systems is a bifurcation diagram, in which a line repeatedly splits into two in an apparently chaotic fashion. The physicist Mitchell Feigenbaum discovered certain ratios in these diagrams that were universal to all systems. In 1988 Sullivan was able to give a conceptual proof of this universality. Another landmark result in this area was to prove, in 1985, that rational maps have no wandering domains.

Discovered a new invariant
Sullivan left IHES in 1997 to become professor at the State University of New York, Stony Brook, where he is now Distinguished Professor. Returning to topology, in 1999 Sullivan and Moira Chas discovered a new invariant for a manifold based on loops, which created the field of string topology, an area that has grown rapidly in recent years. In 2008, Sullivan also wrote a paper in the Journal of Topology with the hedge fund billionaire and philanthropist Jim Simons.

Prizes
Sullivan’s notable awards include the Institut de France’s inaugural Élie Cartan Prize in 1981, the 1993 King Faisal International Prize in Science, the USA’s National Medal of Science in 2005, the 2006 Steele Prize for Lifetime Achievement from the American Mathematical Society (AMS), the 2014 Balzan Prize for Mathematics and the 2010 Wolf Prize.

He has six children: Lori, Amanda, Michael (who is a mathematician), Tom, Ricardo and Clara.